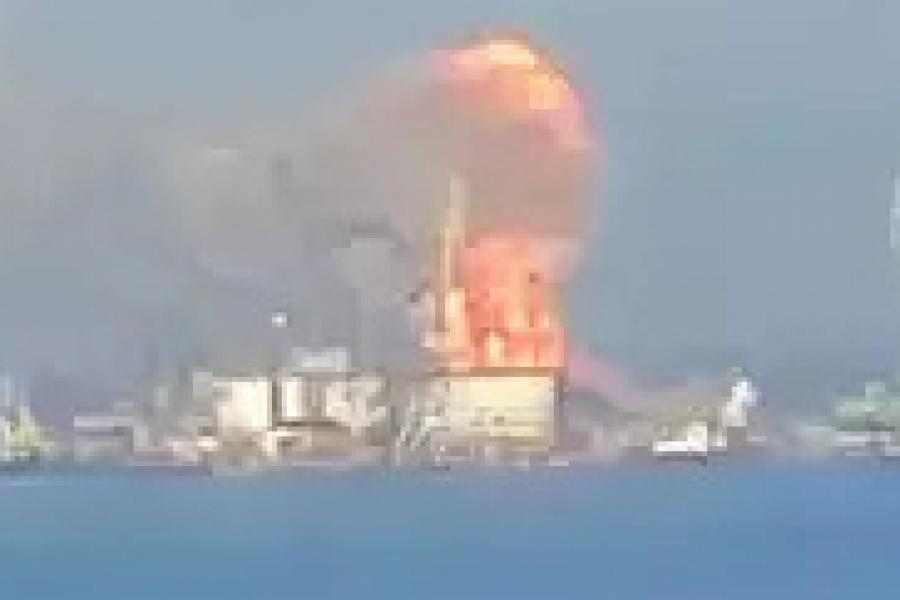 Plumes of smoke and flames in the port of Berdyansk in the Azov Sea, on the site where reportedly the large landing ship 'Orsk' of the Russian Black Sea Fleet is docked. (Courtesy: AFP)

Ukraine on Wednesday said it had struck a Russian naval transport vessel docked in the Azov Sea near the besieged port city of Mariupol, a month into the Russian invasion.

The Orsk large landing ship of the Black Sea Fleet of the occupiers has been destroyed in the port of Berdyansk captured by Russia," the Ukrainian navy wrote on social media.

Plumes of black smoke billowed from a large gray vessel docked next to big cranes in amateur footage of what the Ukraine navy said was the strike on the ship.

Russia's state-run TASS new agency earlier this week had described the arrival of landing craft as "an epic event" that "opens up opportunities for the Black Sea in terms of logistics," citing the Russian defence ministry-linked television channel, Zvezda.

TASS reported that the vessel was capable of carrying up tp 1,500 tonnes of cargo.

Berdyansk is situated around 80 kilometres ( 60 miles ) to the west of the strategic city of Maiupol, which has been encircled and heavily damaged by Russian forces.

Thousands of civilians have escaped Mariupol through evacuation corridors but some 100,000 people remain lacking water and electricity.

Kyiv says more than 2,500 people have been killed in the city since Russian President Vladimir Putin launched his invasion of Ukraine one months ago.

Russian force have advanced further in southern Ukraine but only control Kherson, a town of approximately 200,000 people.


This news item is from Join us
https://www.humanrightscouncil.in/news.php?extend.34
Print this page